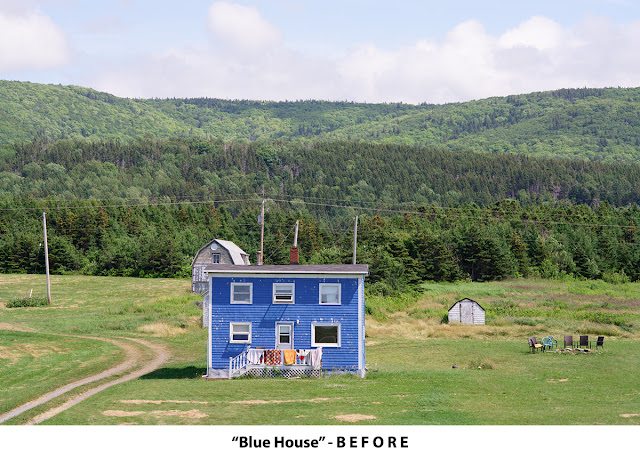 The French-Canadian village of Grand-Étang on the west coast of Cape Breton Island, Nova Scotia has a few brightly colored cedar-shingle houses that I have always found very striking. This one, with its electric blue walls and neat white trim, is a beautiful example. 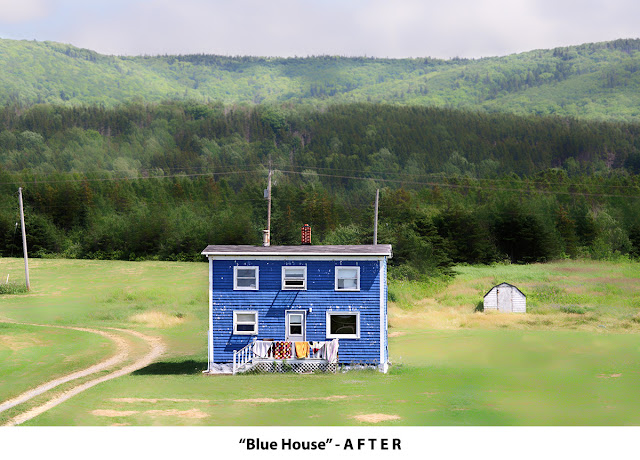 My challenge was to make the house stand out from its surroundings. I wanted to eliminate distracting visual elements. I blurred the surrounding field and hills while leaving the house sharp. I cloned out the barn behind the house to the left, the two utility poles immediately next to it, and the chairs at the extreme right. But I kept the little storage hut because I liked the juxtaposition of the larger blue house against the smaller drab structure.

I cropped the image a little to make the house more dominant. But I didn't crop too much because I wanted to maintain the feeling I had of the house in its landscape.

I made some lighting and contrast adjustments in order to, among other things, make the shadows on the house more prominent.

September 07, 2018
The tablelands of western Newfoundland are a rare geological formation - a piece of the earth's mantle, normally buried seven or more kilometers beneath the earth's crust, but forced to the surface here several hundred million years ago. The area lacks the usual nutrients required to sustain most plant life, and so is nearly barren. The high iron content of the rock accounts for the rusty brownish color. In the BEFORE image the sky is correctly exposed but everything else is badly underexposed. This was fixed with an exposure correction in the RAW image.  The BEOFRE image has a slightly bluish color cast which was fixed with a color temperature correction. After making those global adjustments, I worked separately on four sections of the image: the sky, the land in the upper part of the frame, the creek, and the large rock that dominates the lower right-hand corner.  The overall plan was to bring out the textures and contrast in the rocks, maintain the darker ton
Post a Comment
Read more

August 10, 2018
The isolated coastal village of Trepassey, Newfoundland sits in the southeast corner of Canada's eastern-most province. The vantage point of this photograph makes for a classic Newfoundland scene: a sliver of human settlement poised between sky and sea. Ethereal, other-worldly: I wanted to capture that feeling. Because I had pointed my camera slightly upward to get more sky in the frame, I had to correct the resulting perspective distortion - notice in the "before" image how the lines of reflected light closest to the sides of the image are twisted away from the center.  I fixed the color temperature to eliminate the strong bluish cast. I corrected the vignetting - notice how the "before" image is significantly darker at all four edges. I cropped from the bottom of the image to bring the bottom border closer to edge of the reflected lights. How do you convey "ethereal"? For me the key elements were delicacy,  l ightness, and a sense of &qu
Post a Comment
Read more