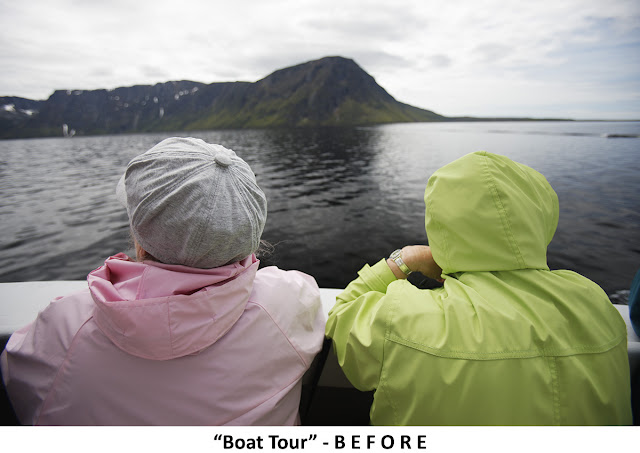 On a boat tour of Western Brook Pond in western Newfoundland two women focused on the spectacular scenery while I focused on them. The pastel colors of their windbreakers contrasted with each other and with the natural tones of the land, water and sky. The image tells a strong, simple story: two people awestruck by 600 meter (2000 foot) cliffs towering over a remote, pristine lake. 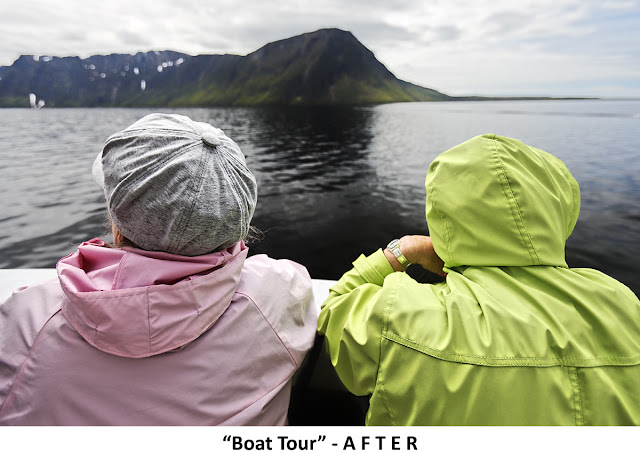 This image required less work than many of the others featured in this blog. It's a good example of how even relatively modest adjustments can transform a photograph from merely "interesting" to "worthy of displaying".

I wanted to separate the women from the landscape - make each part of the image stand out in its own right. I was taken by the colors and textures of the jackets so I increased vibrancy a little to bring out the color and used fine-contrast and tone curve adjustments to highlight the fabric's folds and shadows.

I added drama to the background through tone-curve adjustments that increased contrast and deepened the cliff shadow that falls nicely between the two women. I made the textures of the cliff-face stand out a little more than in the BEFORE image. And I used fine-contrast adjustments to soften the surface of the water.

The horizon needed straightening - it tilts to the left in the BEFORE shot. Finally, I cropped the image to draw the viewer into the frame and heighten the sense that you are standing right there behind the women watching the scenery with them.

September 07, 2018
The tablelands of western Newfoundland are a rare geological formation - a piece of the earth's mantle, normally buried seven or more kilometers beneath the earth's crust, but forced to the surface here several hundred million years ago. The area lacks the usual nutrients required to sustain most plant life, and so is nearly barren. The high iron content of the rock accounts for the rusty brownish color. In the BEFORE image the sky is correctly exposed but everything else is badly underexposed. This was fixed with an exposure correction in the RAW image.  The BEOFRE image has a slightly bluish color cast which was fixed with a color temperature correction. After making those global adjustments, I worked separately on four sections of the image: the sky, the land in the upper part of the frame, the creek, and the large rock that dominates the lower right-hand corner.  The overall plan was to bring out the textures and contrast in the rocks, maintain the darker ton
Post a Comment
Read more

October 17, 2018
The "autumn colors" image is one of the all-time great photographic clichés, but that doesn't mean a serious photographer should avoid it. There is plenty of scope to do interesting things and have fun with photos shot when the leaves turn yellow, orange and red in the fall.  I love yellow so am especially fond of birch trees in the fall - the contrast of the leaves against the white bark is a sight to behold! The other thing I love about birch trees is that the branches often veer off in crazy-looking directions and angles, as in this photo. It makes for a dreamy, surreal feeling I associate with Vincent van Gogh's landscapes. I shot this photo late in the afternoon on a dull day, so the ambient light was uninspiring. I used exposure and tone curve adjustments to compensate for that. I also used fine contrast adjustments to bring out detail in the leaves and tree trunk. To accentuate the elements of most interest to me - the white bark and the yellow lea
Post a Comment
Read more