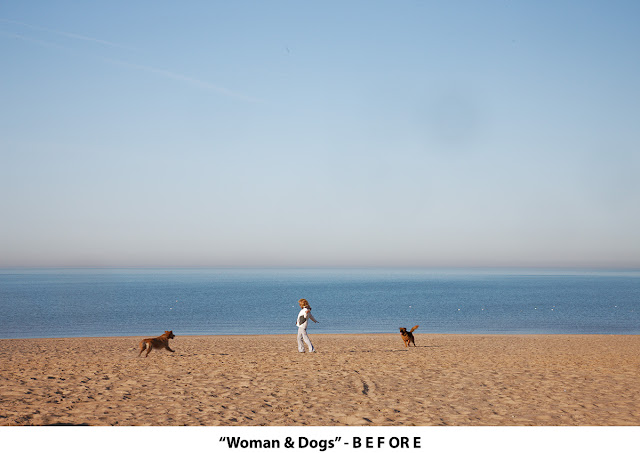 Once in a while the photography gods smile on you, and this was one of those moments. It was a beautiful early-autumn day in 2011 on the western shore of Lake Michigan at Grand Haven. This woman happened to be standing in front of me, arms akimbo, her dogs running toward her from opposite directions through the sand. Perfect. 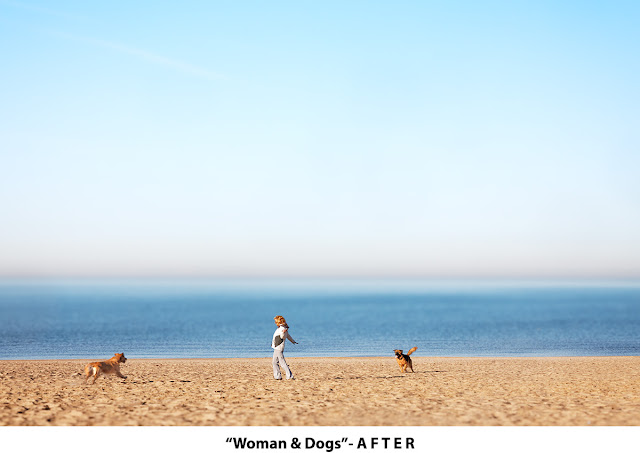 The original image also looks dull, because of under-exposure and because the light at that time of day was flat. I corrected this with fine-contrast and tone curve adjustments that give the image some "pop".

I also made separate tone curve adjustments to the woman and dogs, brightening them and bringing out detail, especially in the dogs.

In the BEFORE image the depth of field appears infinitely wide. Everything is in focus, from the nearest part of the beach all the way to the horizon. Although this may work well in many circumstances, in this particular case I wanted to isolate my three subjects from foreground and background. So I used a DxO PhotoLab tool that let me create the illusion of narrow depth of field by blurring everything except for the strip containing the woman and dogs. Precise work was required - using both the eraser and cloning tools in Photoshop - to blend the in-focus woman into the blurred background.

And then there was the strange round "blob" in the upper right of the BEFORE image (something on my sensor or lens; not sure which). This was easily remedied with the patch tool in Photoshop. I also cropped the image slightly - the image looked better with more sky and less beach, and with the women and dogs more to the left than in the BEFORE image.

August 10, 2018
The isolated coastal village of Trepassey, Newfoundland sits in the southeast corner of Canada's eastern-most province. The vantage point of this photograph makes for a classic Newfoundland scene: a sliver of human settlement poised between sky and sea. Ethereal, other-worldly: I wanted to capture that feeling. Because I had pointed my camera slightly upward to get more sky in the frame, I had to correct the resulting perspective distortion - notice in the "before" image how the lines of reflected light closest to the sides of the image are twisted away from the center.  I fixed the color temperature to eliminate the strong bluish cast. I corrected the vignetting - notice how the "before" image is significantly darker at all four edges. I cropped from the bottom of the image to bring the bottom border closer to edge of the reflected lights. How do you convey "ethereal"? For me the key elements were delicacy,  l ightness, and a sense of &qu
Post a Comment
Read more

August 14, 2018
While travelling in Oklahoma in 2014 I stumbled upon a rodeo in the town of Chandler. This photograph of a young cowboy wrestling a steer was one of my favorites. I cropped the image to make the cowboy and steer more prominent and create a more intense feeling of movement.  The cowboy and steer are more off-center in the AFTER image and the diagonal line extending from the puff of dust through the cowboy's extended leg and torso draw the eye nicely from lower left to upper right. And the AFTER image has a stronger tension between that same line and the opposing diagonal line formed by the steer's tail and backbone. I adjusted the color temperature to remove the yellowish cast. I made fine-contrast and tone curve adjustments to create more separation between the background, the cowboy/steer and the cloud of dust.
Post a Comment
Read more