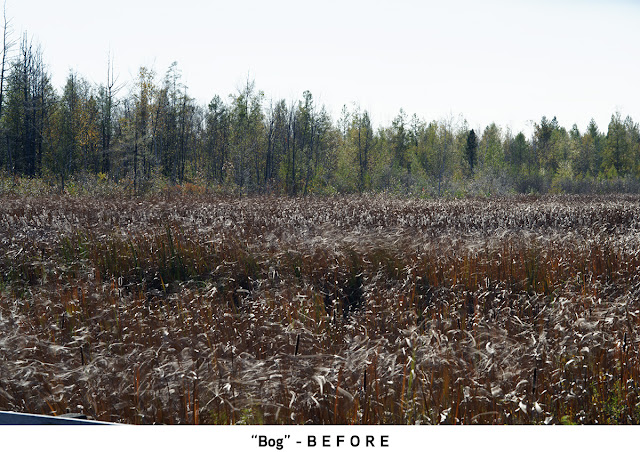 There's a beautiful peat bog at the eastern edge of my home city of Ottawa that I visit often. On this day the bulrushes were swaying in a westerly wind and the scene was lit by the low-angled autumn sun.

To capture the motion of the windswept bulrushes I set a shutter speed of 1/4 second. The trees in the background were relatively motionless but no matter how hard I tried I couldn't capture them in sharp focus with the slow shutter speed. This mattered because I wanted to contrast the blur of the bulrushes with the sharp stillness of the trees.

Maybe the elevated boardwalk I stood on was vibrating slightly. Who knows? Point was, I needed an easy solution. 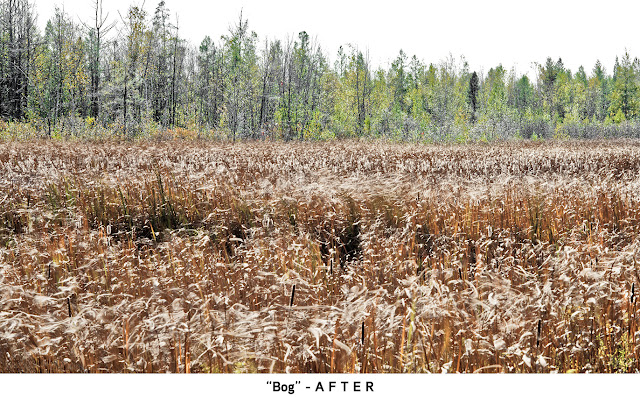 I took a second exposure (not shown here) at a fast shutter speed to freeze the trees. In photoshop I combined the top part of the the fast-shutter image with the bottom part of the slow-shutter image.

I had used a neutral density filter for the slow-shutter image, and removed the filter for the fast-shutter image. As a result, the color temperature of the two images was not identical. (In my experience, neutral density filters are not entirely "neutral"). I used color temperature, color balance and hue/saturation adjustments to blend the images together.

I used fine contrast and tone curve adjustments to accentuate the way the sunlight illuminated the tops of the bulrushes. I raised the overall exposure level to correct for underexposure of the BEFORE image.

Because I was shooting almost directly into the sun, colors were a little washed out so I did a vibrancy adjustment to compensate.

I cropped the image to reduce empty sky at the top and eliminate the small section of boardwalk railing at the lower left. I also changed the aspect ratio (from 3:2 to 3:1.75) to accentuate the horizontal line where bulrushes meet forest.

August 08, 2018
The French-Canadian village of Grand-Étang on the west coast of Cape Breton Island, Nova Scotia has a few brightly colored cedar-shingle houses that I have always found very striking. This one, with its electric blue walls and neat white trim, is a beautiful example. My challenge was to make the house stand out from its surroundings. I wanted to eliminate distracting visual elements. I blurred the surrounding field and hills while leaving the house sharp. I cloned out the barn behind the house to the left, the two utility poles immediately next to it, and the chairs at the extreme right. But I kept the little storage hut because I liked the juxtaposition of the larger blue house against the smaller drab structure.  I cropped the image a little to make the house more dominant. But I didn't crop too much because I wanted to maintain the feeling I had of the house in its landscape.  I made some lighting and contrast adjustments in order to, among other things, make the shad
Post a Comment
Read more